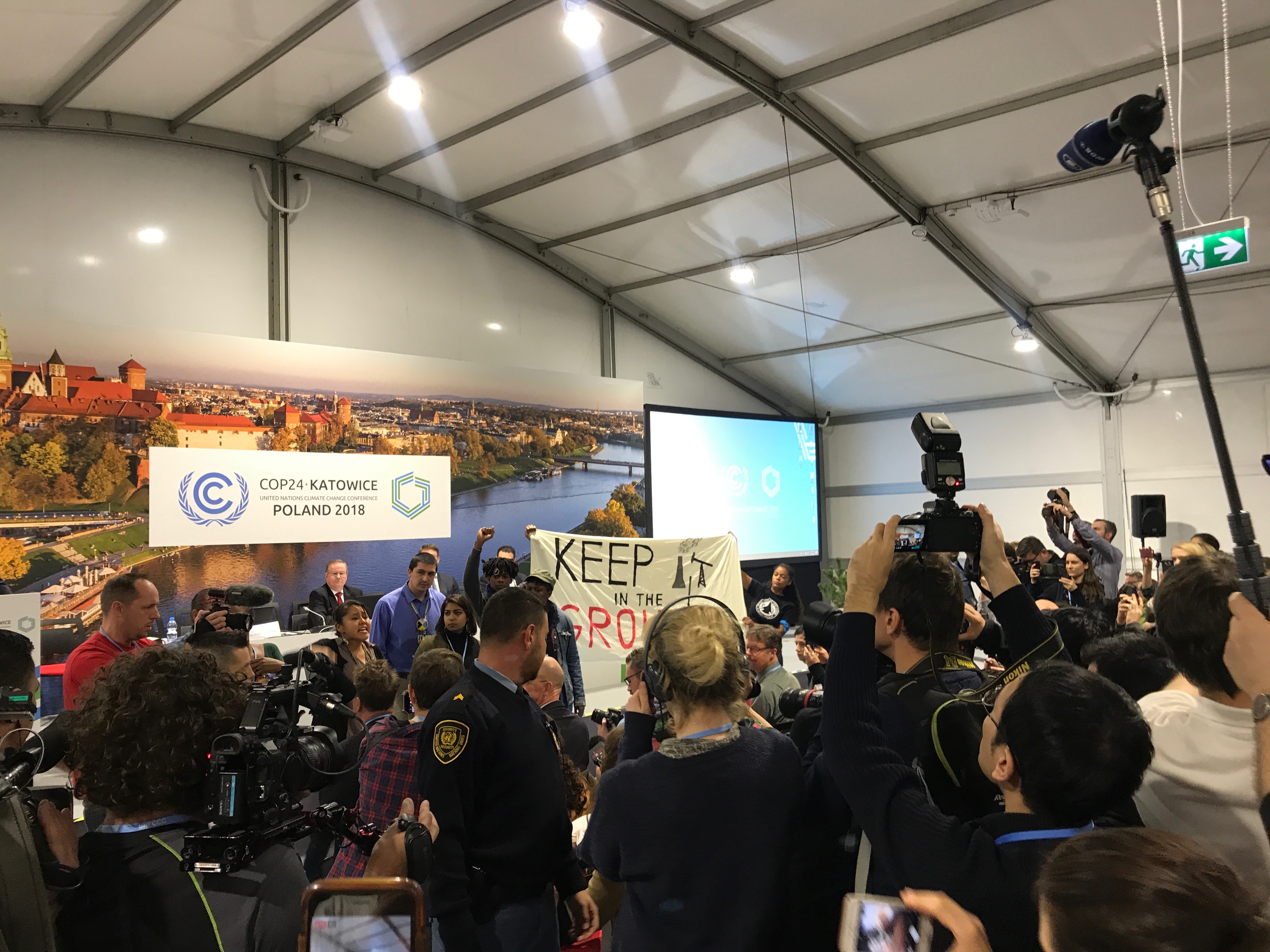 Tensions between climate activists and Trump administration officials were on full display at the United States’ official event on energy innovation Monday at this year’s United Nations climate conference in Katowice.  This comes on the same day as Sunrise Movement activists staged a mass climate action at the U.S. Capitol to lobby for Representative-elect Alexandria Ocasio-Cortez’s push for a Select Committee on a Green New Deal.

“Keep it in the Ground!”

Monday morning’s panel featured members of President Donald Trump’s administration, private sector representatives and Australia’s ambassador for the environment.  Speakers embraced the fact that the U.S. is now the number one producer of oil and gas, citing breakthroughs in hydraulic fracturing and horizontal drilling. They also touted the disputed claim that the U.S. has become a world leader in emissions reductions.

“Alarmism should not silence realism,” said Wells Griffith, the Trump’s Senior Director for Energy at the National Security Council.  “The reality is countries will continue to use fossil fuels.”

Griffith continued with his prepared remarks before being interrupted by laughter from the audience.  Two protesters then quieted the crowd, saying:

“These false solutions are a joke, but the impact on our frontline communities is not. We hold the solutions and we know that we must keep it in the ground.”

Protesters then broke into chants, yelling “Shame on you!” and “Keep it in the ground!” before exiting the event.

“The policy is not to keep it in the ground.  It is to use it in a way that is efficient and clean,” said Griffith, responding to the activists’ demands.

These protests in Katowice occurred a few hours before over 1,000 young people from the Sunrise Movement lobbied members of Congress to embrace a Green New Deal.  This proposal, which already has the support of at least 22 Democratic representatives, has come to the forefront in recent weeks thanks in part to Ocasio-Cortez’s call for a Select Committee on a Green New Deal. Calls for a Green New Deal are also prevalent in climate actions taking place around this year’s climate conference, as the movement continues to gain steam.

100s of high school and middle school students hold a silent mass protest outside of Rep. Pelosi's office while advocating for the "#GreenNewDeal." pic.twitter.com/GVXaIV4zkB

“To construct a policy agenda designed to drive innovation, that is a complete failure,” said Banks. “I don’t think it’s a reasonable target.” 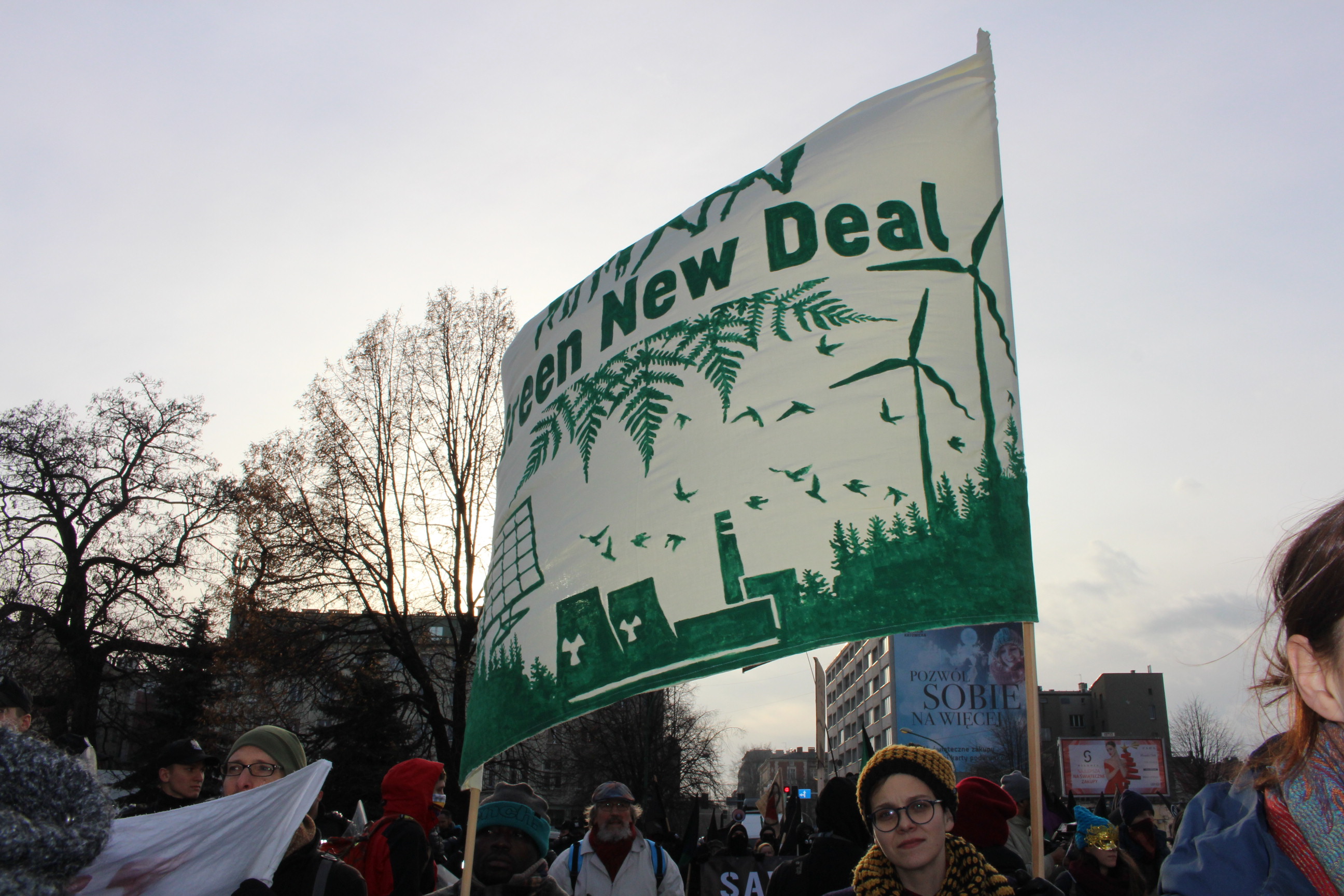 But Kate Aranoff of The Intercept, who has written about the Green New Deal, believes there is good reason to be optimistic:

“We’re in a funny parallel world in that what U.S. lawmakers are considering is far more ambitious than almost anything officially on the table at COP24,” said Aranoff.

Her recent piece imagined what a Green New Deal plan could mean for the next generation. “Global South nations for years at these talks have called for more ambition, that 1.5°C is the bare minimum needed for survival and to maintain a way of life, not be displaced and not face disproportionate climate impacts,” she said. “I think we finally have a proposal on the table in the U.S. that is maybe prepared to help deliver that.”