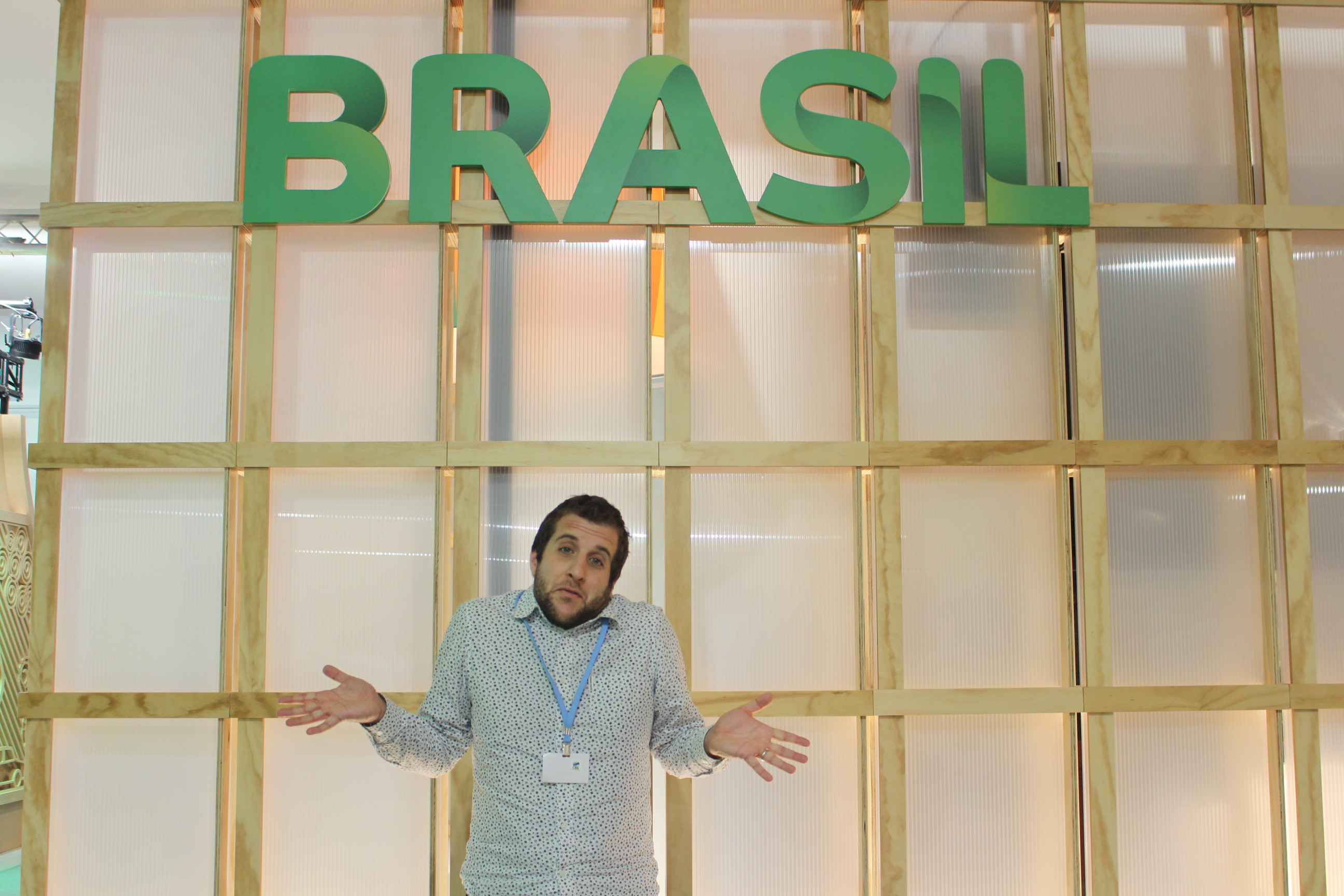 Brazil, which was nominated by the Latin American and Caribbean region to host next year’s climate conference up until a few weeks ago, withdrew its bid to host COP25 following the election of far-right climate denier Jair Bolsonaro. While Brazil cites “current fiscal and budget constraints” as its official reason for withdrawal, President-elect Bolsonaro made clear in a statement to reporters that he has no interest in tackling climate change:

“Environmental politics can’t muddle with Brazil’s development. Today, the economy is almost back on track thanks to agribusiness, and they are suffocated by environmental questions.”

Despite this major setback, Brazil maintains a pavilion space at COP24, where it held a few relatively low-key events Wednesday. This afternoon featured a group of speakers who gave a joint presentation on “Investing in Nature: Guaranteed in Return.” Speakers emphasized the need for data and information to support decision-making and land use planning, stressing the fact that half of Brazilian cities have suffered from water scarcity and lack of rain.

“This is not a Marxist conspiracy,” said the panel’s moderator, taking a clear shot at one of future Foreign Minister Ernesto Araujo’s more infamous statements, claiming climate change is part of a plot by “cultural Marxists.”

A Multilateral Approach to a Low-Carbon Economy

Tuesday morning’s high-level events on global climate action began with several panels on embracing multilateralism that included heads of state, business leaders, and indigenous representatives. These distinguished leaders talked about the need for a bold and united approach to transition to a low-carbon economy.

It’s not the technology or knowledge that’s missing. It’s our commitment to one another. #COP24 #GlobalClimateAction #StepUp2018 #Talanoa4Ambition #DaringMakesADifferencehttps://t.co/GY2O7Ih4JS pic.twitter.com/7j5kBf39av

“We need reality checks and we need hope. The earth doesn’t need us. We need the earth,” said Jemison.

These opening remarks were followed by a series of panels starting with First Minister of Scotland Nicola Sturgeon and Indian cement executive Mahendra Singh. Sturgeon, a fierce advocate for combatting climate change, talked about Scotland’s bold plan to become carbon neutral by 2050, citing both the moral obligation for developed countries to lead and the economic benefits a low-carbon economy could bring. Singh spoke on behalf of the private sector and stressed the need for companies like his to strive for carbon neutrality.

Tuesday morning’s plenary sessions concluded with a panel on the Partnership for Electromobility Declaration, which introduced the declaration “Driving Change Together – Katowice Partnership for E-Mobility,” a joint proposal by Poland and the United Kingdom. This proposal already has 38 countries from five continents on board, in addition to several international organizations and 1,200 companies.

Presenting this declaration was a panel of speakers that included Guterres, Morawiecki, COP24 President Michał Kurtyka, and Austrian President Alexander Van der Bellen. Signatories seek to “support the development of the e-mobility sector, exchange of experience and scientific cooperation at the global and local level.” Speakers discussed the importance of decarbonizing transport and advances made by their countries in electrifying their transportation systems.

The Role of Climate Finance at COP24

Also taking place this week are the early negotiations in climate finance, which is expected to be one of the focal areas at COP24. Negotiators seek to secure $100 billion a year in climate finance to address the needs of developing countries that was set forth in the 2009 Copenhagen Accord.

“I think there are three big areas where we are looking for progress on climate finance: the funds, the rules, and the goals,” says Joe Thwaites, Associate at the World Resources Institute. “On the funds, it is not so much the COP decisions, but the reassurance that the Green Climate Fund replenishment will be ambitious.

Thwaites went on to say: “We are looking for better rules on how to report on finance …both forward looking – the projected finance flows in the future – and backward looking on what has already been provided.”

On the $100 billion goal, Thwaites says,

“There is decent progress toward that goal but there is a need for further scaling up.”

The Role of Mangrove Restoration in Climate Change

On Wednesday, experts from around the world held a joint panel on “The Need for a Coordinated Global Mangrove Conservation Agenda” at the Panda Hub at the World Wildlife Fund Pavilion Area. Mangroves are largely ignored in climate negotiations despite the fact that they can lock down more carbon dioxide per hectare than tropical forests.

Mangrove conservation and restoration could play an important role in stabilizing the climate.  This topic has become increasingly urgent with as much as half of the world’s mangroves having already disappeared. Panel speakers hammered home these facts and made a convincing case that a mangrove conservation agenda should play a more prominent role in future negotiations.