Participation is a Human Right #COP24 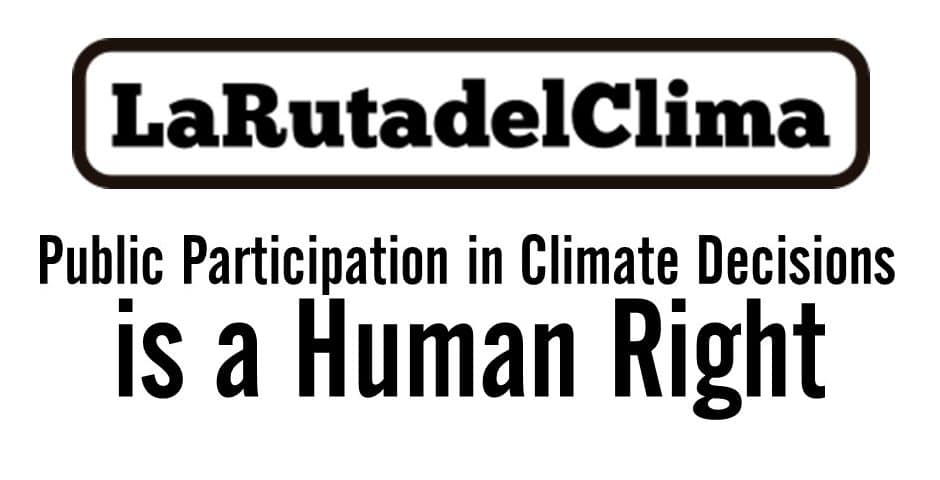 Public Participation is a Human Right that face challenges at national and international level. Regional Agreement play an important role to boost the participation of the public as countries need to be reminded that they have a core obligation to the human person when making climate change decisions.

Where does the right to public participation originate?

The right of public participation in environmental matters has two roots: a) Right to Development [1] that has been affirmed as an environmental issue due to the re-conceptualization within sustainability and whose validity is reflected in the SDGs [2] and b) right to participate in environmental decision making. [3]

The first ones is older(1986), and it grants the right to people to participate, contribute and enjoy social, political, cultural and economic development, and establishes that this is a condition for all human rights to be realized (Article 1 – Resolution 41/128) The Vienna Declaration and Action Plan (1993) tells us that the human person is “the central issue of human rights and fundamental freedoms and, therefore, must be the main beneficiary and must participate actively in the realization of these rights and freedoms.” [4] In addition, this statement establishes a connection with sustainable development and refers to the Rio Declaration (1992).

The UNFCCC has as its objectives sustainable development and GHG reduction(Art. 2 UNFCCC). However, it did not expressly mention the right to development for political reasons [5] existing when it was drafted. However, it does mention the right to public participation in three instances a) Art 4 Regarding the implementation of education, awareness and training, it says that the broadest participation is included, including NGOs. b) Art. 6 that talks about ACE mentions that States should promote public participation in the study of climate change and its effects and in the preparation of appropriate responses. c) Art 7 that allows NGOs to be observers and this is governed by the Rules of Procedure. [6]

The creation of the UNFCCC (1992) it is carried out in the context of the Rio Declaration, which is where the second root comes from. Principle 10 of the Rio Declaration mentions that environmental issues are best managed with public participation and that States must motivate public participation by providing adequate information and access to environmental justice. This is at the heart of the Access Rights established by the Aarhus Convention and the Escazú Agreement (which separately includes the protection of human rights defenders in environmental matters).

Currently, the Paris Agreement mentions Public Participation as part of the preamble principles that guides the implementation of State of climate actions as part of their human rights obligations. Also, public participation is considered by Article 12 as an important means to enhance climate action and that States shall cooperate to implement it.

Who is the public?

The public from a human rights perspective is the person, as the center and the subject that enjoys these rights. However, the right to public participation is a procedural right and the regulations restrict how people exercise it. For the UNFCCC, individuals (individuals) can not participate but only legal entities, which are NGOs, and they  participate through their representatives as observers. Participation at first was limited to only observing based on the provisions of the UNFCCC and the Rules of Procedure, but participation practices at the conferences and COP Decisions have expanded this right.

For countries that have signed regional treaties such as the Aarhus Convention or the Escazú Agreement, have adopted a normative definition of the public that is broader. For Aarhus (Art 2.4) and Escazú (ART 2.d) it is made up of people and legal entities or their organizations – associations. This implies that the NGOs in the UNFCCC exercise a representation function since the people who have the right to participate can not do so, at least for States signatory for these traties. For the countries that ratified these international agreements, there is an obligation to promote their principles in international forums (Aarhus 3.7) (Escazú Art. 4.10) so there is an opportunity to promote greater openness and protection of this right.

What does this right imply?

The Aarhus Convention and the Escazú Agreement, which have been respectively ratified by a significant number of European and Latin American countries, set forth certain common principles or criteria. The participation of the public must be given with sufficient time; with adequate and pertinent information; be open, effective and inclusive; give consideration to comments and information provided by the public; have a defined procedure; that the participation of the public is considered when making decisions and that the public is informed of the final decision.

The Escazú Agreement mentions that states will establish conditions in environmental decision-making processes that adapt to “the social, economic, cultural, geographic and gender characteristics of the public.” [7], will ensure greater accessibility as soon as possible in relation to language [8] and will promote public participation in international instances. [9] These are some of the specific principles that the signatory countries of this Agreement should promote in decision-making forums such as the UNFCCC. These are essential when there is a significant imbalance [10] in terms of the participation of actors from Latin America and the Global South present in the UNFCCC processes compared to those from the Global North. This can affect how the interests of individuals are represented in each region. The above is one of the main challenges for the exercise and enjoyment of this human right for the Global South.

The Almaty Guidelines of the Aarhus Convention develop in detail how the exercise of public participation in international forums should be facilitated. These guidelines establish criteria to guide participation in accordance with the nature of the forum but with transparency and the participation of social actors. Participation in these forums must occur at all relevant stages of the decision-making process and in the event of exclusion, it must be carried out based on a transparent process, with clear criteria and ideally defined beforehand.

The exclusion of the public from decision-making spaces is one of the main demands of the NGOs participating in forums such as the UNFCCC, as a result of the actions of the States during the negotiations that are sometimes perceived as arbitrary and whimsical. The vague definition of “overriding reasons” to decide the exclusion of the public and the absence of criteria defined by the Rules of Procedure, [11] is one of the great challenges for the safeguarding of the right to public participation within the procedures of the UNFCCC.

The Paris Agreement makes reference in its preamble directly to the respect, promotion and consideration of human rights, and specifically mentions the right to development and public participation, as to be consider when adopting climate actions. The agreement reminds States of their current and future obligations regarding human rights in terms of climate action. This mandate is key to promote an advancement of the enjoyment and protection of the right to public participation in decision-making on climate change.

[6]  Rules of procedure of the Conference of the Parties serving as the meeting of the Parties to the Paris Agreement FCCC/PA/CMA/2016/3/Add.1 (2017) UNFCCC