The environmental justice movement began making headway in the United States during the 1980s as a result of growing public awareness about environmental issues and their immense impact on daily life. With an ever-increasing intensity of natural disasters, there is an ever-growing need for a coordinated response to environmental risk factors. However, deep-rooted social inequalities continue to persist and have impacted the way various governments have historically responded to environmental concerns.

Marginalized communities are disproportionately affected by environmental pollution and hazards, as well as the fallout from natural disasters. On the other hand, affluent sectors of society are often far better protected from the ill effects of environmental hazards due to their privileged position in society. In short, certain sectors are more vulnerable for no reason other than their racial and/or economic grouping. These social discrepancies and inequalities are the driving force behind the environmental justice paradigm.

At its core, environmental justice attempts to counter these inherent social inequalities by meaningfully engaging people regardless of their status, race, color, religion, politics or nationality in developing environmental laws and policies. This, in turn, provides a sense of agency and involvement among marginalized groups in dealing with environmental risk factors facing their communities. In light of climate change in an increasingly globalized world, environmental justice is necessary to alleviate some of the risk factors facing some of the world’s most vulnerable populations.

Indigenous people and subsistence farming communities, like the Maya Chorti of northwestern Honduras, are often cited as peoples who are especially vulnerable to the harmful impacts of climate change. Due to their reliance on subsistence farming and close socio-cultural proximity to their ancestral lands, many indigenous groups in Central America are severely impacted by radical changes in the climate pattern. For example, the recent warming trend observed across northern Honduras has resulted in widespread droughts. This has altered the production patterns of the various crops rural communities have traditionally relied on for their subsistence, including corn and beans.

As a result, thousands of people in northern Honduras are now facing severe food shortages. This has fueled the ongoing displacement of rural populations, who are forced to leave their homes because they are starving and are unable to attain minimal living standards for themselves and their families.

Impacts of hydro-electrical and mining operations

It is worth noting that the climatic warming process and the recurrence of droughts in large parts of Honduras are intensified as a result of deforestation and bad water management policies. Multinational hydro-electrical and mining operations have decimated the water systems, including rivers and aquifers across Honduras. This has disproportionately impacted indigenous communities.

For many rural communities, many of which are indigenous, these water systems are their only source of freshwater. Pollution of the rivers as a result of the exploitative activities of multinational mining and hydroelectric companies not only threatens these peoples’ access to fresh water but also undermines the ecological integrity of the region as a whole. In Honduras, the forests and vegetation often rely on the freshwater sources of the rivers and aquifers to thrive, especially during the dry season when rainfall is limited. However, hydroelectric and mining projects in Honduras often divert or interrupt the natural flow of large sections of river systems or deplete freshwater sources in order to sustain their electrical production. In other parts, interruption to the river flow has resulted in large-scale flooding of local villages.

These interruptions and the depletion of river water sources have jeopardized sensitive ecosystems and the lives of dependent rural communities. Examples of this can be found in the ongoing Patuca III Hydroelectric Project. The project has already been stopped on three separate occasions due to international outcry. The dam is proposed to be constructed on Lake Patuca in the district of Moskitia, Honduras. This region is widely considered to be the “largest, most biodiverse expanse of tropical wilderness north of the Amazon Basin.” 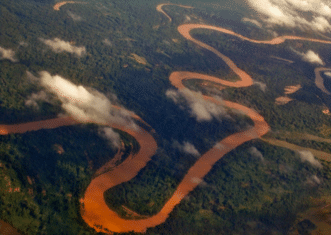 Aerial photo taken of a section of Lake Patuca, in Mosquitia, Honduras.

The indigenous people who have lived in this region for hundreds of years have helped preserve this amazing biodiversity. Yet the prospect of Patuca III dam construction, which is underway as we speak, threatens to endanger this precious ecosystem and bring irreversible harm to its biodiversity and the indigenous people living along the banks of the Patuca River.

Environmental scientists have noted how the dam would block migratory patterns of various fish species that live within the river, which may lead to their extinction. Upstream, the rising water levels would “submerge rainforest vegetation, soils, and organic matter, which would emit greenhouse gases as they rot.” The increased commercial activities, rising water levels and destruction of forest habitats would endanger thousands of species, including jaguars and tapirs. Additionally, the local indigenous fishing communities along the river banks would be flooded out of their homes, and their lifestyle irreversibly altered.

What’s more, the project has been marred by an accusation of corruption and mishandling by officials involved in the construction of the dam. The construction companies involved in the project are owned and operated by officials in the government. Likewise, experts have doubted the dam’s efficiency in meeting the electrical needs of the local communities, noting that Honduras already possesses a surplus of energy capacity but lacks proper management, handling, and distribution of energy sources for the various localities.

Despite these facts and widespread local and international resistance to the construction of the dam, the government seems to be intent on its course. Protests by local indigenous communities have often been met with extreme violence, including assassinations.

Similar outcomes can be observed in the example of mining operations in Honduras. In Copan, Honduras, where I worked for nearly two years, extensive gravel extractions from the riverbeds of the various major rivers, including Rio Copan, have been a major issue for the local villages. The depletion of rock and gravel from the riverbed results in runoffs and alteration of the water flow. The pollution from the machines extracting the minerals and the processing centers has reduced the fish populations in the rivers and has been a cause of sickness among Maya Chorti communities that rely on the rivers for their freshwater.

Extensive digging and extractions have diverted the water flow of the main rivers systems in Copan, Honduras. As a result of the runoffs and diverted water flow, many of the rivers are increasingly drying up. Coupled with the rising intensity of droughts and reduction of annual rainfall in the region, this trend may contribute to deforestation and even desertification throughout northern Honduras. Rural and indigenous communities that require water to sustain their crops and subsistence would be forced to leave their territories, which in turn would add to the unfolding migration crisis that Honduras is facing. If we are truly concerned with the migration crises in Central America, local environmental concerns must be taken into account.

For too long, Latin America has had its natural wealth exploited and extracted to fuel foreign industries and centers of capital. It is time to stand in solidarity with indigenous nations in the struggle to achieve environmental justice for all people. If we are to coexist in the world, we can no longer afford to accumulate wealth and capital at the expense of depriving the vast majority of people access to lands and healthy environmental conditions.